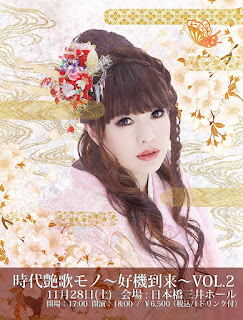 So yesterday I went to Ishikawa Chiaki’s live concert. Here are the reports, folks.

Lately I think it is becoming a template to introduce the artist I’m featuring in my articles. But surely, this one doesn’t need an introduction, right? Well, she’s pretty famous… I think. But okay, I’ll give the benefit of the doubts, and introduce her first. I’m well aware that my favorite artists aren’t exactly common knowledge, even among Japanese.
I first knew her as a member of See-Saw, alongside legendary composer Kajiura Yuki and Nishioka Yukiko. Of course Nishioka faded to obscurity soon after, while Kajiura went on to become legend, and Ishikawa… is doing very well at the moment. So what was See-Saw like during their early years? Here’s a video from 1994.

Ah, the good old days. She was actually quite beautiful back then, wasn’t she? As was Kajiura on the keyboard. But I have no recollection of those days, because frankly I’ve only came to know them by 2005. Why 2005, you ask? Well, it’s where high-speed internet finally arrived, for select elite individuals in certain fields of environment, mostly related to research and tech. Not including me, because at that time the rest of the society only started knowing what internet is, and I’m still stuck on my US Robotics 64kbps modem, making high-tech noise, trying to fetch me… a See-Saw song called Anna ni Issho Datta Noni using an FTP protocol. Why that particular song? That brings us to this.

Ah yes, Gundam SEED. Arguably the first of Gundam series I watch. Wait, “arguably”? Well, I was a 7th grader (1st year junior high school) by the time Gundam Wing was on TV, and while I woke up at 6.a.m. every sunday just to watch it, I can’t say I really understood the plot back then. It was to me, mostly about waiting for Wing to blast every other MS-Leo with a beam buster rifle, never mind all the Romefeller, Oz, White Fang, Sanc Kingdom, Project Meteor heavy stuff. That’s after I rewatch the whole series. And here’s another one.

Haters notwithstanding, you will notice that Gundam SEED has very good music all over it, whether the OP/ED/IN songs, or the BGMs. Kajiura contributes greatly towards this. One thing that you’ll surely notice is that the musical direction of See-Saw has been totally different compared to the 1994 clip. Well, I think Gundam Wing was 1995, and See-Saw sounds pretty much the same as Two-Mix, and… you got my point. It is also noticeable how Ishikawa has found her singing style. Now her voice is totally distinguishable and you can put her in the bracket of ‘those vocalist I can immediately recognize just by hearing once a song I never heard before’. Here’s an earlier song of See-Saw from the critically acclaimed anime .hack//Sign and Subaru isu mai waifu.

So to recap, here’s how the story goes.

Well, the rest is history, because after 2005’s Gundam SEED Destiny the band kind of disbanded. Kajiura went on to achieve great things as full-time composer in anime and games, most often making them a hit. In my (admittedly subjective) view, sometimes she has probably lifted an otherwise ‘average’ anime with her quality music. I mean, look at this list, it’s unbelievable! What would SAO be without her? I’d say average. Not without this kind of awesome music.

Oh and let’s not forget how mediocre Tsubasa Reservoir Chronicle would be without Makino Yui, and Kajiura’s Song of Storm and Fire.

Okay, enough with Kajiura, because this is supposed to be an article about Ishikawa Chiaki. Sometimes I got carried away easily. Anyway, even before See-Saw disbanded, Ishikawa already has a moderately successful solo career, such as this one, OP Theme of Ningyou no Mori, a 2003 anime adaptation of Takahashi Rumiko manga (of Inu Yasha fame).

Okay, admittedly the anime wasn’t that much of a big deal, I haven’t watch it either. But good OP Song, don’t you think? Oh next, this one’s familiar. I’m a yuri anime fan, so obviously I would watch Simoun, a 2006 anime. Memorable, that one. And even better music.

One of my all-time favorite. And superb videoclip, matches the theme of the anime. I’d go kyaa kyaa back then hahaha. Yuri FTW. And you might recognize her from 2007 fangirl anime Bakumatsu Kikansetsu Irohanihoheto IN Song. But what people really first think of her first when hearing her name would be the following video. A legendary song from 2007 highly controversial anime Bokurano, a song called Uninstall.

This song spread like wildfire within our residence. Everyday somebody would play it at least once. It’s like a virus that you can’t uninstall (pun intended). We even use it as joke reference whenever someone’s computer crashed/malfunctioned/BSOD’ed. Such is the awesomeness of the song.
Uninstall, and the Bokurano anime was very special to us. It was the dawn of HD Quality anime (hell yeah 720p baby!), and with a ground-breaking, earth-shattering theme of a super-giant robot that makes Gundam toy-size in comparison, that also hid a very dark plot inside it. The anime introduced me to mangaka Mohiro Kitoh‘s works. My personal favorite would be this one. It’s awesome!

Ishikawa Chiaki has been a prime example of how a musical career can be maintained in such a way that gives longevity. She’s been in the music industry for 20 years now, an amazing achievement, especially looking at latest case with Himeka. Oh, here’s another Gundam song for you folks. This one’s from the overly successful Gundam-00, Prototype (ED Theme).

Looking at her song repertoires, I think I can say she has had a successful career as a solo artist. To me, she’s a legendary figure that I can truly admire. Her signature voice and musical style is one-of-a-kind. Which is why I was so excited to finally see her performance Live. The event is being held at Mitsui Nihonbashi Hall, Nihonbashi Tokyo. It’s a two-day Live solo performance, but I’m very busy with the mid-term, plus a trip to Saitama on Momday, so I can’t attend both days. 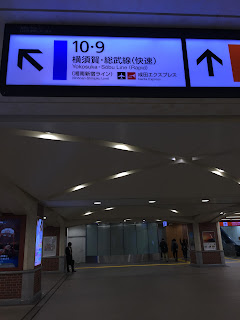 It’s very easy to get there, I only need to take the Yokosuka-Sobu Line towards Narita Airport. It’s an express. And here’s where I got off, Shin-Nihonbashi Station. 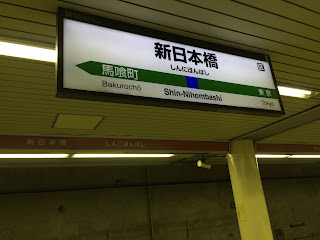 It’s Saturday, so there were very few people in the station. But Nihonbashi is an elite business district in Tokyo, so lots of fancy buildings and expensive restaurants. 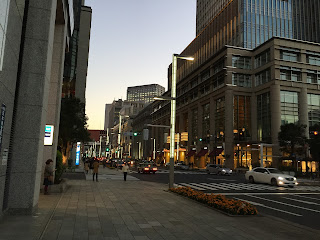 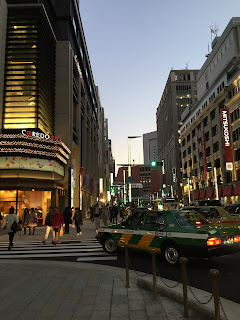 There’s also a temple there. I took some pictures as I passed by. 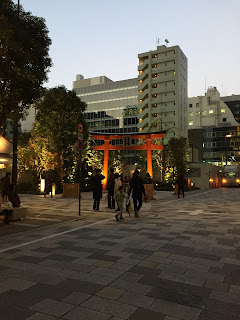 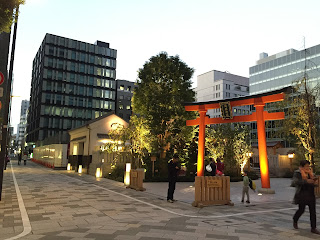 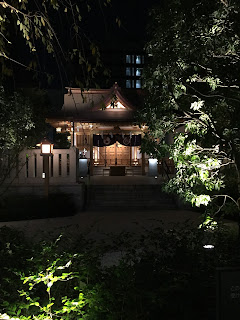 What a great place. But first thing’s first. Which is to enter the mall, and head straight to floor number F4. Eh? F4? Kind of reminded me of a certain mall in Jakarta. But anyway, here’s where it is. 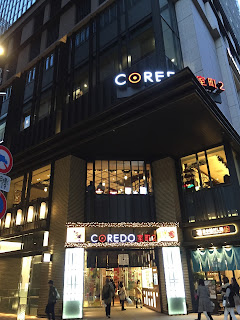 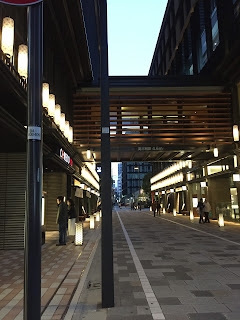 Absolutely high-class! It’s incomparable with last week’s Ceui concert in the Live House! It’s worlds apart! Now here’s the inside of the hall. It’s huge! And have I told you that it was SOLD OUT? 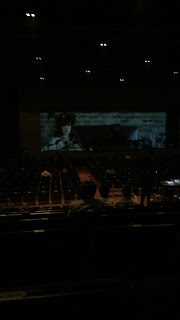 The first thing that strikes me with the Live concert was how unusual the instruments were. You would find the likes of shamisen and taiko, and those traditional Japanese flutes I (sorry can’t remember their names), with only Bass and Keyboard as representative of modern musical instrument. That’s amazing. 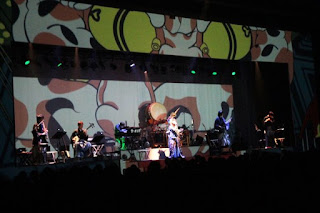 The set was also great. The hall is equiped with a giant projector, so they can illuminate the stage with motion picture. And the attention to detail was mesmerizing. At one point during the solo taiko, everywhere else was dark except for the big taiko, iluminated with a sequence of animation. Uh, well, you can’t have that with a Live House, can you? 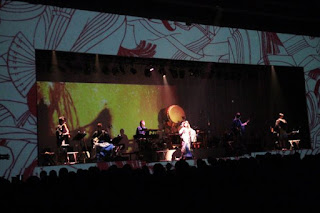 Chiaki Ishikawa’s MC is also fun. It’s totally different from an idol’s MC, in a way that it feels like listening to your beloved aunt coming over to your house after long time no see. It’s that kind of feeling. 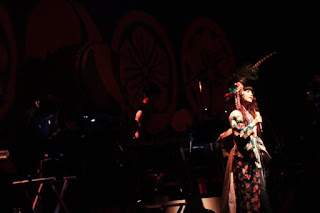 Which brings us to the crowd. I’m actually quite surprised that the majority of audience was in fact women in their mid-20s/early 30s. Most of them came by themselves or with their female friends. No, I’m not going to comment on those. What I would like to tell you is the atmosphere.
I’m not sure whether it’s the atmosphere, the demographic, or the marketing itself, but this is by far the neatest live performance I’ve ever attended. Basically all that you are going to hear from the audience are either a rapturous applaud or the occasional laugh when Ishikawa said something funny. So it’s natural that I start to wonder, “will there be an encore in this kind of setting?”
To my surprise, there was!
So after the last song and Ishikawa took a last bow, naturally the audience would applaud her very loudly. Normal, right? Wrong. The clapping doesn’t stop. For nearly five minutes. And it got louder and louder.
High-class encore. 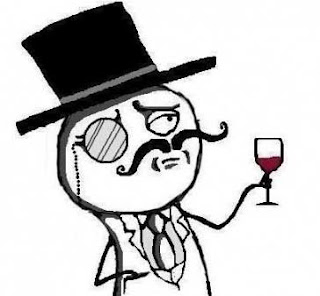 If there’s one thing that I might regret over the concert, is the fact that I didn’t bought the advanced ticket for next year’s Live performance. Well, I didn’t have the money anyway, so it’s kind of natural. Also, I’m not sure whether I have schedule for June of next year.

So that’s it, folks! End of my report. Here’s some other picture I took to wrap things up. I will be busy for several weeks, so maybe no post from me. My next confirmed Live schedule will be Sprite concert, December 29th.