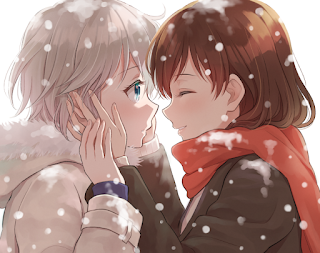 Having come from a tropical country, passed by the earth’s equator line means that I’ve never experienced winter. It’s fair to say that having never experienced it, I was unable to comprehend the sheer experience of winter. Now that I’m in Japan, may be I’m beginning to understand it. And what better way to express it than recalling the best winter/snow themed songs? So here are some of my favorites.

Simple reason. The FEELS. One of the most influential PC Game ever to have grazed the land of visual novels. Not only the story, the music was also memorable. Even if you haven’t played the game, the overall atmosphere of the song will convey a bittersweet tale, and sensation of coldness. If you’ve played it, you’d instantly recall our beloved little sister, her fragile constitution, and her warm smile. Play it in winter? Triple kokoro damage.

Sato Hiromi is one of my all-time favorite singer. And if I have to pick one of her best works, Tears in Snow is definitely first-choice. Theme Song of the popular 2006-released PC Game, not to be confused with the (equally brilliant) anime.

No, I don’t play the game Mashiro Botan, of which this song is the theme. I never did. Once in a while, I stumbled upon a song where the composition, the lyrics, and the voice of the singer instantly gave you a unique feeling on first time hearing. Rare event, but this song was one those. Sakura Saori is a talented artist, and everybody in the anisong sphere should know True My Heart. But to me, this is her best song so far. Heck, she even sung off-pitch here, presumably intentionally, but it really works.

What can I say, the legendary song of the legendary genre-defying anime. Uguu… Kanon was legend. It just showed how Key/VA + KyoAni was a guaranteed success. But then KyoAni found cute girls + playing music also sells, so now P.A. Works took over from them. Kinda. Oh yes, the song. Uguu… Uguu… Uguu… T_T

Kotoko is still my number one favorite artist. And when it comes to winter song, Fuyu no Shizuku is special. Just listening to the song will give a wintery fluttery bittersweet feel to you.

I don’t know much of her. I only know one of her song. And I love it. A great winter song by Alan.

I hate this anime. I really do. I hate the story. But there are two things I just love about it. Ogata Rina and the songs featured. Maybe the fact that I just hate this anime so much is the purpose of this anime? They simply wanted to butthurt the audience? Anyway, if you happened to be someone who survived the pain that the story brought, till the end, you know why this song is special. Suara’s version is excellent, but Mizuki Nana/Aya Hirano’s version is even better.

Uh, yes, I know that this Full Moon O Sagashite is an old idol anime targeted for little girls, adapted from a shoujo manga. But really. You just can’t help but to love Mitsuki.

The first song that introduced me to μ’s and Love Live! School Idol Project. Back then I didn’t know anything about it. But it’s such a great song. It just is.

White Album. Need I say more? Though this one is the 2013 version.

Of all the Mahou Shoujo Lyrical Nanoha songs, this one holds a special place in my heart. Oh and, please do remember Reinforce I.

I’m not a P. It’s just that with such amount of song repertoire in idolm@ster’s disposal, there’s bound to be a good winter-y song. right? Well, this is one. Love it.

Old song for old people. Heheh. But really, this song by Judy & Mary is awesome. It still is.

Because Ayatsuji Tsukasa is the best girl of Amagami SS.

This song has that image of an elegant princess from some faraway magical land dancing in the snow, don’t you think? Also, Hana is so cute :3